Horsefield tortoise’s, Testudo horsfieldi, are from the Mediterranean region and are some of the most popular of tortoise pets. Over the last several decades millions have been exported to the US, UK and Asia mainly for the purpose of being a pet.

Because of heavy trade most countries now have laws in place to monitor capture and export activates. Many countries now, where the Horsefield is popular as a pet, do captive breading, which increases the health and survival or this tortoise as well as alleviating the natural capturing and exporting taking place in the Mediterranean.

They range in the wild living as far along their bordering territory as Iran, China, Russia and Pakistan. This tortoise is known for burrowing and hibernating for extreme climates.

*As an Amazon Associate I earn from qualifying purchases.

Their natural habitat consists of hot summers and very cold winters. The geography varies from dry steppes and deserts to more lush places where grass and vegetation is plentiful.

One useable bit of information from its history is the need for a drier climate than a tropical tortoise. We can basically break classify many of these similar tortoises into two useful categories; Mediterranean and tropical. Tropical tortoises are home to more humidity and moisture in both the air and grounds while Mediterranean tortoises are use to a more dry and humid climate and ground. Too much moisture in the air can affect out our Horsefields respiratory system and too wet of ground can affect the bottom of its shell. This will be covered in the next several chapters and these climate conditions are the reason for much of the directions ahead.

The Horsefield was named after the American naturalist Thomas Horsfield.    Horsefield’s are part of the Testudo genus. There are five tortoises total in the Testudo genus, which also include the Hermann’s, Greek, Kleinmann’s, Marginated tortoise.

There have been many revisions to the Testudo genus and it is not rock solid. Some of the five tortoises within Testudo have been considered different taxonomists, but not all have been widely accepted. Most people now widely accept the Horsefield tortoise to be in the Agrionemys genus. Yet many still refer to Horsefields as Testudo.

Horsefield’s are usually flat and round with a variety of colors but they are usually greenish brown.

Females grow larger than males. The way you can tell the difference between the sexes is that males have longer tails that usually curl and females have shorter wider tails.

Carapace – The entire upper part of the shell, all of the scutes

Plastron – The bottom of the shell

Marginals – The first layer of scutes at the base

Supracaudal – The scute right above the tail

Nuchal – The scute right above the neck 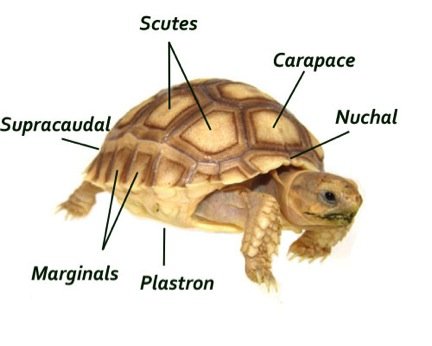 Search Site
Recent Posts
Main Menu
Get Social
horsefieldtortoise.co.uk is a participant in the Amazon Services LLC Associates Program, an affiliate advertising program designed to provide a means for sites to earn advertising fees by advertising and linking to Amazon.com and Amazon.co.uk.